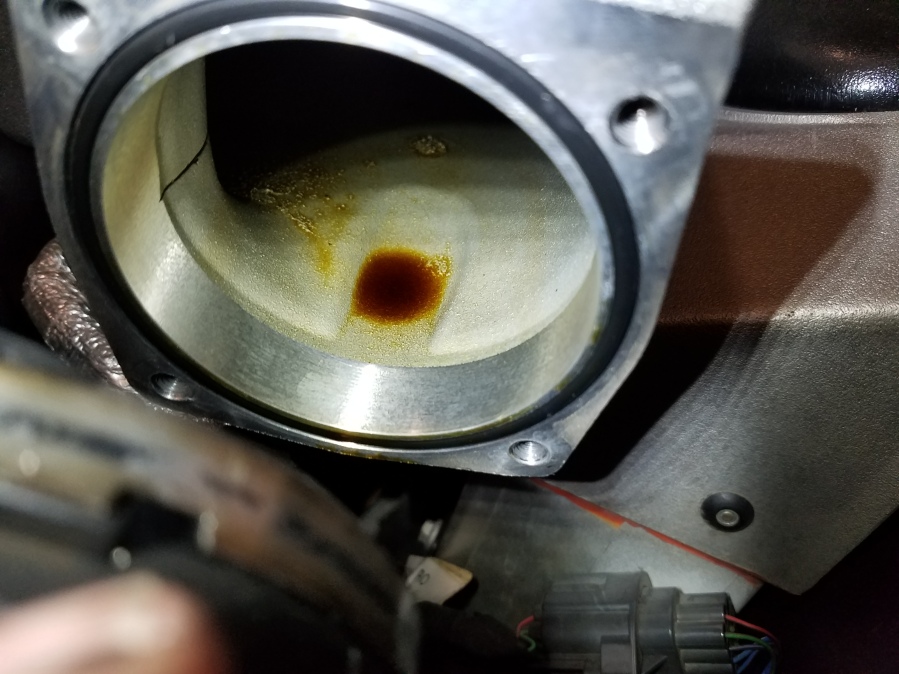 This is a weak spot in the DB9 engine.  If you’ve ever removed your throttle body and found a puddle of engine oil laying in the intake manifold chamber, the PCV system is to blame.   In this article I am going to give a short background of the ‘what’s going wrong’, and then in the next articles I will lay out which parts you need and how to replace them.

What is the Positive Crankcase Ventilation System Doing?

All engines have blow-by gases that escape past the piston rings and build up in the engine crankcase.  In the old days (think sixties and before) all a manufacturer had to do was leave an opening in the crankcase chamber and let the pressure blow out naturally to the atmosphere.  My 1961 MG Midget has this exact setup, just a tube connected to the side of the engine block that runs down under the car and lets the gases vent out into the slip stream while driving (and making yet another oil stain anywhere I park).  Problem is, those gases are full of nasty emissions – partially burnt fuel and other bad actors – and it’s bad behavior to dump them into the atmosphere today.

Starting in the late sixties most manufacturers had to cleanup their act a bit, and a simple solution was to just suck those fumes back into the intake system (using the natural vacuum that occurs) and burn them again as part of normal engine operations.  Nice simple solution – and they named it Positive Crankcase Ventilation (PCV).

As part of this solution they needed to worry about two things:

So why is there engine oil building up in my DB9 intake manifold?

Why? Because it was sucked into there through the PCV vacuum line, and on our DB9’s this line connects to the intake manifolds right behind the Throttle Bodies, the location of maximum vacuum.   The air coming from the crankcase is laiden with oil vapor, and some portions of this entrained oil are dropped out into the manifold as they enter.  A pool of oil can form (see photos).

The discussion forum’s point to ‘faulty’ PCV valves as the culprits, but honestly it’s not their job to stop entrained oil from flowing through the pipe.  The PCV valve is just supposed to act as a one way valve and stop air from going backwards down into the crankcase.   There are two separate air/oil separators that the vapors are sucked through prior to reaching the PCV valves, and my guess is that they aren’t designed that well and aren’t doing a good job.   If the velocity of the air flowing up the pipes is fast enough, I can imagine a thin mist of oil vapor starting to deposit on and coating the walls of the pipe, and the flow of the air itself dragging the film of oil up the pipe until it opens up into the intake chamber.   So, the real culprits may be the air/oil separator design or speed of the air flow (which relates to the pipe diameter).  Either way it sucks [pun intended] – we get engine oil pooling up in our intakes.

If I’ve missed some subtly here, please comment to correct me below.

Is this really bad?

Not particularly.   While annoying to discover the oil when doing service work, it’s not a big deal since there is relatively little of it.  A few things to consider:

How specifically is the Aston Martin DB9 PCV System designed to work? 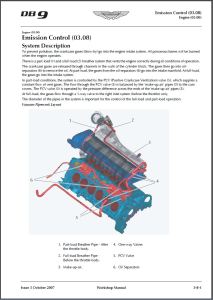 The official Aston Martin Workshop Manual section 3.08 on Emission Controls has a nice diagram and write up about it.

Essentially there is a 2-stage system.   Since the vacuum levels within the intake manifolds vary tremendously between part throttle (high levels of vacuum) and full throttle (low levels of vacuum), they had to come up with a system that would work in both cases.

Most of the time we drive our cars around, we are barely using any of the engines massive power capability, and we are on part throttle.  In part throttle conditions the vacuum levels in the intake manifold chamber are high, and are great for sucking in crankcase gases.

If you look at the diagram:

Simple enough.  Air is sucked out through one set of hoses, and fresh air sucked back in through another set to replace it.

When our cars are roaring at full throttle, one side effect is that there is a lower vacuum level in the intake manifold since our foot is mashed flat to the floor on the throttle and the throttle body butterfly valve is wide open.   Another problem is that the small plastic pipes used in the part throttle condition probably can’t flow enough gases fast enough.

In this situation Aston has designed a second stage system into only the right hand engine bank.  Under these conditions there is now a level of vacuum in front of the throttle body at the plastic air intake piping.  The line that was designed to allow fresh air back into the right hand valve cover now reverses its level of flow and lets the vacuum that exists suck fumes back out this larger diameter pipe.

But how you ask since there is a duck-billed one way valve at the hose connection to the valve cover?  On the right hand bank they have designed in a clever Y connection to the rear end of the stainless steel pipe, one branch goes up to the valve cover for the partial load conditions, and the other branch connects to a hose that circles around the back of the engine to connect just below the right hand PCV Valve at a T branch in the rubber hose (see the photo earlier).

In these conditions the partial load lines are all doing the same as there were before, but the following changes have happened:

So, in full throttle conditions this just sucks more air to keep up.

I could see this design leading to more oil build up in the right hand plastic air intake pipes ahead of the throttle body.  The same entrained mist effect could be happening here during full throttle events.

OK, so I am amazed you’ve read this far, you must be motivated to try and do something about the oil build up in your DB9. 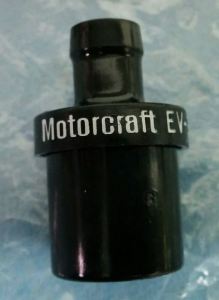 PCV Valves can wear out.  They spend a fair amount of time with their internals ‘fluttering’ as the air flow moves through them.  To test them is simple, blow in one end and the air should flow through, blow in the other end and it should be immediately blocked.  It’s normal in most any car to have to periodically replace them.

In the next few posts I will show you which parts you’ll need (and how you can get the PCV valves for cheaper since they are really Ford parts), and how to install them.

[Updated Dec 2020]  It’s been over 3 years now since I replaced my PCV Valves following the process above.  I just completed my annual service, and when I had the left hand throttle body removed I was able to snap this picture of a completely oil free inlet manifold plenum.   The change of the PCV valves seems to have done the trick!

Here is a video where I show you around the PCV system and describe the information above:

8 thoughts on “The Positive Crankcase Ventilation (PCV) System in an Aston Martin DB9 – and what Sucks about it!”