Whether you drive a Toyota Corolla or a DB9, eventually you need to change your wiper blades.  They are made of rubber, and rubber deteriorates.  Time, Sunlight, Dry Climates all take their toll on it.  In any normal car changing your wiper blades isn’t rocket science, but of course in an Aston, there is a bit of a trick to it.  This article will share the tricks so you can do it quick!

Because deterioration occurs, Aston Martin lists changing the wiper blades as part of EVERY two-year service regime (check out my articles on all the two-year service items here).   I suspect Aston’s position might have been that they couldn’t be sure they would last four years, so including them as part of every two-year service made sure the owner would never suffer a streaky wiper experience (what a horror).  I also suspect they like to sell wiper blades and charge to install them.

Being the wild rebel that I am, I decided to find out how necessary it was to do it that often, and I let mine ride.  I live in Norther California where the summers are hot (daily average high is 92 deg F) and I park outside.  I really do drive her everyday all year round, so she see’s heat, rain, sunlight, bird droppings, the works.   I found mine lasted five (5) years as my daily driver.   That is considerably longer than two years, and confirmed my suspicion that there is no need to make it a standard part of the two year service.

I would recommend that you inspect them every year as part of your annual service, and then replace them after four years on average or whenever you see them starting to degrade.

What to Look for

You might discover them failing in one of two ways.    When you go to use them, they smear water and debris in patches rather than crisply wiping the surface clean, or, you see the rubber blade physically failing (as was the case in my car seen in the photo).   When either situation occurs, don’t delay, just replace them.  As soon as one blade begins to fail, replace them both.  The other can’t be far behind and honestly you drive a DB9, you can’t possibly be that cheap ;>).

The driver and passenger side blades are different sizes and designs.  The Drivers side blade is longer, and as you can see in the photos incorporates a small leading edge winglet to help press the blade down at high speeds.   This is important to note.   If you fit generic non-OEM blades you may be missing the wing and introduce a problem driving at highway speeds.  This is a safety item, and probably a corner not to cut.

I elected to go with Aston Martin OEM blades.  My car is a LHD 2005 DB9 Coupe.  These parts numbers are for LHD cars (I’m not sure if they cross over to RHD – be sure to verify for your car).

Once you have your blades in hand, its time to get them installed.

You need only the simplest tools to accomplish this:

Swapping the blades will take about 5 minutes once you have all your tools and parts.

I asked an Aston Master Technician while my car was at the dealer one day and he shared his wisdom with me.  Now let me share it with you.

First Trick – let me point out that the driver side wiper arm can’t be raised to an upright position since it is blocked by the hood.   In fact, if you aggressively lift the arm up while trying to struggle the blade off, you can easily scratch the paint on the edge of the hood ad this photo will attest to (damn previous owner).   Pull off an approximate 6” strip of blue painter’s masking tape and wrap the edge of the hood where the drivers side wiper arm will potentially bump it. 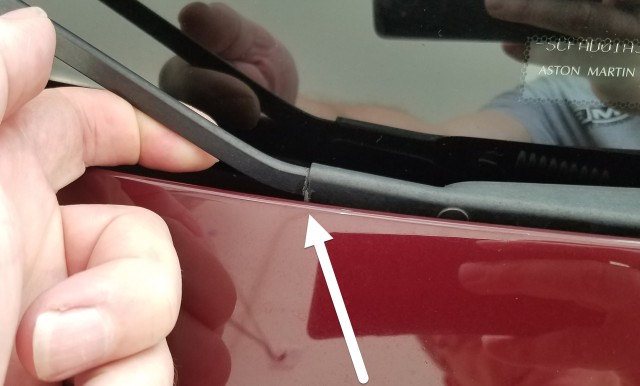 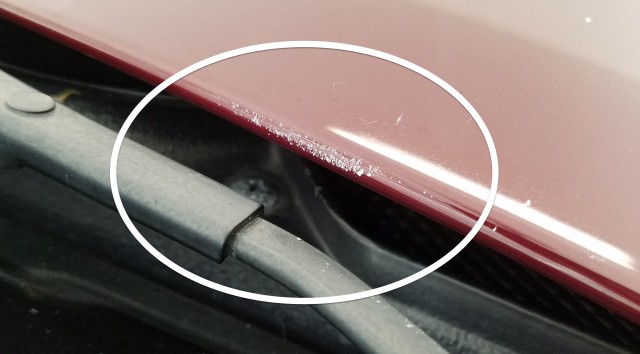 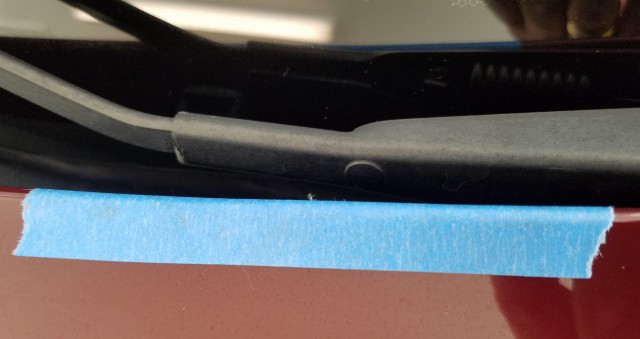 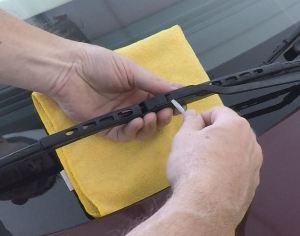 Second Trick – the wiper arms are spring loaded to pull down toward the glass.  If you have the blade off while swapping it, and have the arm pulled back, it wants to slam itself back down against the glass.  And crack it.  Avoid the $4,300+ windshield replacement (read about that here).  Take a Microfiber towel and fold it into quarter sized so it’s nice and thick to use as a pad.  Place it under the wiper blade center before you start, and this way if the arm slips loose (like it actually does in my video below) it will safely land on the Microfiber, no harm done. 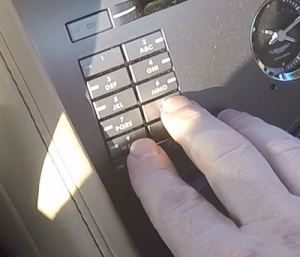 Third Trick – Aston Martin eventually realized the problem with the interference on the driver side, and have secretly programmed a special command into the cars electronics that will place the wipers up into ‘Service Position’.     Put the key in the ignition at position 1.   Press and simultaneously hold the 8 & 9 button’s on the stereo console center stack.  While continuing to hold them, use your other hand and turn the key to position 2, and tada, the wipers should pop up to attention straight up on the windshield well clear of the hood interference.    Press 2 & 6 and insert the ECU for newer cars.

Sadly, this doesn’t appear to work on the very earliest models, my 2005 included.   It seems like the feature works on 2006 MY cars or newer.   I’ve tried a bunch of times on my car to get this to work, and nada.  If it works on your 2004 or 2005 car, please leave me a comment below and maybe include your car number (last 6 digits of your VIN) so I can tell if your car is later in the production run than mine.  I’m interested to nail down when this improvement was introduced into production.

One of the few other Aston Martin video’s I’ve ever found on YouTube were these two goofballs playing with the feature – check it out to see it actually work.

If your car does this trick, I still recommend you position the microfiber towels, but you can skip the blue tape obviously.  I am going to write this article without the assistance of Service Mode, mostly because it really isn’t needed if you see how it’s done.

As noted above the passenger side is easier to do because the metal wiper arms doesn’t interfere with the hood.  I’d recommend you start on this side so you can get a better view at what you are doing in the process, and then you’ll be an expert when you move over to the drivers side and have to work very close to the windshield.

With the safety precautions in place follow this simple procedure:

Easy peesy.   Now do the other side.

With both changed you should be good to go for another four to five years.   Job done.

I’ve created a short video on the process which will likely be a really good way to see the magic of getting the blade loose from the arm while very close to the glass.   Worth a watch.

I expect some of you are aching to find a non-OEM alternative.   To help you along here are some close up high resolution photos of the blades and the winglet.  Spoiler alert – the blades are made by Trico, but are slightly custom to Aston that they include two screw mounting tabs for attaching the wing on the drivers side blade.  Standard off the shelf Trico blades don’t have these, so you can’t merely reuse the winglet.  Please leave a comment below sharing what you discover.