I haven’t posted as many “How To” fix it articles in the last few months (my apologies) but it was actually due to a deliberate strategy I had to try and spread the word about Aston1936.com and reach more readers/viewers.  Aston Martin DB9 owners are a global community, and there are only about 6,000 of us, so reaching everyone is a bit of a challenge. 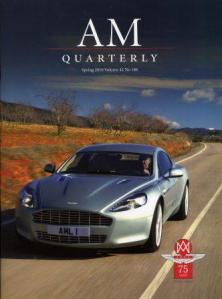 When I learned that my first article was being published in Aston Martin Quarterly (AMQ) magazine that mentioned this Blog, I wanted to have something relevant for most ANY Aston owner to read wen they arrived, not a super specific article on how to change a DB9 marker lamp.   Broad appeal.   I also didn’t know exactly when the magazine would start to ship, and even then it’s a global publication and I would need to allow several weeks for it to make it to all corners of the world.

As you’ve probably seen (and are bored of by now), I put the “The True Costs of Owning an Aston Martin DB9” up as the primary article for almost two months.   I put a substantial amount of effort into that article, and in particular the Video on YouTube.   I actually included myself as a presenter (Jeremy Clarkson I am not), wrote a script, planned out the scenes, and drafted my neighbor Rob as a cameraman again.  About 20 hours of effort to produce the resulting 15 minute video.

The results have been a pleasant surprise.   Readership of this blog definitely started to increase as the AMQ article hit the streets in late May.   In months prior about 50 people a day were visiting, and now its closer to 125.   In May over 9,000 articles were read.  I appreciate ALL of the readers taking the time to read my ramblings and hopefully getting some information to help them with their DB9 project.

The YouTube video on the True Costs has been the real surprise.  Most of my videos get viewed maybe 200-300 times (which I think is great), probably by actual DB9 owners tackling the maintenance task I am describing.  But, as of today, the True Costs video has been viewed nearly half a million times!  The video has been watched for over 2.6 million minutes (that’s over five years of minutes)!   Great for the ego to be sure.  [Maybe it was discovered as a cure for insomnia]  What was also interesting was the 100’s of comments left by viewers (and some foul mouth trolls), 99% of which were constructive and positive.   Nearly 3,000 people are subscribed to the Aston1936 YouTube Channel now.  Won’t they be surprised when my upcoming PCV Valve videos get posted next.  I suspect my Subscriber count is doomed to dwindle.

But, the AMQ edition has fully circulated around the world now, and my brush with YouTube fame is waning, so its time to get back to the business of this Blog, helping others learn how to look after their own DB9’s.  I am going to try and get back into the habit of publishing an article per week.

I have a slate of articles I am getting ready in the weeks ahead (where the repair work is already completed along with filming), and they will include:

Also in the works for the future I have a few articles I am gearing up to under take:

If anyone out there is interested in sponsoring the parts for some of these projects, please reach out and leave a comment.

If you are interested in these upcoming articles please leave me a comment below, it might help me prioritize the order I get them released in.