While driving I started to notice the faintest shimmy in the drivers side wing / side mirror on my DB9.   I’d only really notice it in my peripheral vision, just some hint that something was shaking occasionally.   It’s one of those things you forget quickly as soon as you don’t see it happening.  After a few occurrences I finally decided to check the mirror to see if it was loose.  Sure enough, you could wiggle the mirror body up and down.  Not the glass mirror itself, but the actual main structure of the mirror assembly.  I compared it against the opposite side mirror (mounted solid as a rock) and it was clear that my drivers side was loose. 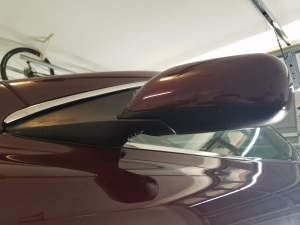 My car is a 2005 Coupe, and has the early style mirrors (fitted up until about VIN 05151 sometime in MY09).  They are fixed – they don’t fold in (either manually or electrically).  Even with the early cars, there are two generations of the mirrors that look identical externally, but differed substantially at the door mount (hidden within the workings).   The 2nd generation can be retrofitted to replace the 1st generation, but alas I have the 1st gen.  I believe later model cars have mirrors of an updated ‘sleeker’ design, complete with a feature to fold in automatically when parked (which was an option on the early gen 1 and 2 styles).

I searched the Official Aston Martin Workshop Manual for some details on how to tighten up this joint – no luck – they only show how to mount the entire mirror assembly to the door.  Since the mirror is a complete assembly, it’s not something they bothered to document.

I posted a question out in the AMOC DB9 forum, but got completely dead air (probably because the new AMOC website design was just released and the Forums are NOT very easy to use/browse anymore and I think its put off the long time members – bummer).

I decided to just plow on and see what I could figure out.  In fact it’s pretty simple to tighten up the joint, and if you have the same issue you can cure it in just a few minutes.  I encourage you to check out the video below.

You don’t need many at all, but you will need to fashion a very simple special tool and I will show you how.

We need to fashion a small hook tool to pop open the access cover on the bottom of the mirror.  There is very limited space to get a screw driver into the slot, and this tool is simple to make. 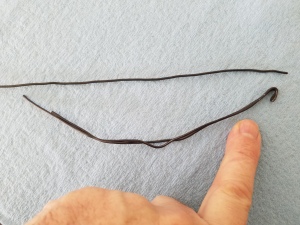 Fold the 12″ piece of wire over and use your pliers to squeeze it together to make a tight fold at one end.  This smooth end will be better than putting a sharp end anywhere near our precious paint, and folding it over doubles the strength.  Use the pliers again and roll the end over to make a tapered hook.  See the photos and check out the video.   This step really only takes about 1 minute.

The whole process will take you less than 5 minutes.

That’s it!  Pretty simple and inexpensive.

Here is a short video on the process I followed.