One day you’ll get into your DB9 and just after “Power Beauty Soul” you’ll be greeted with “Time for Regular Service”.  The DB9 has a scheduled maintenance due every 1 year or 10,000 miles (whichever comes first).  I don’t know exactly how it keeps track of the time (maybe via the GPS providing it the date), but mine recently went off on what was nearly the exact anniversary date from the previous year (I had only driven about 5,000 miles in the 12 months, so it wasn’t the miles driven that tripped it).

As readers of this Blog are aware, I try to do most of this kind of work myself, and in fact I have a complete collection of the 1 year and 2 year service steps posted (check them out).   When this indicator went off, I had already completed my 1 year service regime about a month earlier.  Time to figure out how to turn it off.

The official way to clear this indicator is to use the Aston Martin Dealer System (AMDS) service computer and plug into the cars communication network and send it a command to ‘clear’ the warning.  Unless you have $15K to try and buy a used one, I’d suggest you read on and learn how to do it for free in this 60 second procedure.  Oh, and I guess you have the option of taking your car into the dealer to have it cleared, but that isn’t free either.

A search of the Internet will find several forum posts at AMOC.org, Pistonheads and 6SpeedOnline.  Lots of talk out there about it, and a variety of solutions all similar in nature.  The key word is ‘similar’ – and not how to do it definitively.  So, I set out to try them all and document the one that worked here with a video so you’d know for sure!

The procedure I describe below shows you how to do it manually.  I wanted to let you know that there is now a cost effective OBDII reader available that we can use to ‘reset’ the indicator electronically.   The Foxwell NT510 will do this for you as well as be a useful tool for many other tasks.  Check out my article on it here.

Just your car key and your index finger!

The process should take you less than 5 minutes.  I am covering the process for the early model cars that use an Ignition Key, not the crystal ‘Emotion’ key that was part of the latter models (the process is similar, just my photos won’t match).

That’s it.  Message cleared for another year. 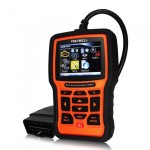 Updated Aug 2020 – I’ve also got an article showing you how you can do this reset more easily using a Foxwell OBDII Code Reader.  Check out the article here.

Here is a short video showing the process I followed.