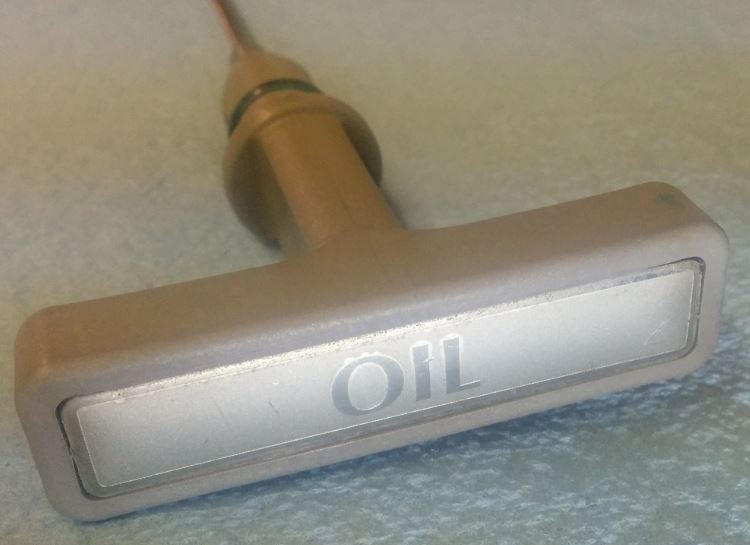 In an earlier article I wrote on refilling/checking the Oil Level in your DB9 (read it here) I brought up the issue about the length of your dipstick.  The deal here is that early model year Aston Martin DB9’s may suffer oil starvation under certain conditions [because 11 liters wasn’t enough?].

Its never been clearly explained anywhere I’ve found, but it is a real deal since Aston Martin released Field Service Action FSA 165V2 essentially recalling the original dipsticks and replacing them with shorter ones.  The result of this would be that you would need to add about one additional liter of oil to reach the new ‘max’ line, and thus have an extra liter safety margin.

Field Service Action FSA 165V2 was issued in May 2008 and was for vehicles VIN range A00001 through A10286 (which included my car A01906).  You can read a full copy of the FSA here.  [Even though the FSA references VINs starting with A’s, I think it will include B VIN’s as well.  A=Coupe and B=Volante  I think it is referring to the first 10,286 cars that rolled off the line in Gaydon]

If you are looking at the P/N on your dipstick to see if it’s the correct one – the FSA says the corrected part is 4G4E-6750-AC.   You can check this by simply removing your dipstick, wiping it off, and inspecting the part number on the back of the measuring end.

What prompted this expanded article is an interesting comment from reader Cor Stakenborg.  He commented that his 2009 DB9 had a dipstick part number 8D33-6750-AB, and wondered if it was correct or needed to get it replaced.   Good question.   [I would be interested to know if his cars VIN was in the range noted above in the FSA – and that only cars in that VIN range may have to deal with this issue]

A quick Google of that part number returned a couple of interesting things.

Cor reached out to Rob Sims, Parts Manager at HWM in England and asked him if the dipstick was a correct (and shortened version).  The answer was “Yes” and that it possible that other later model cars had dipsticks with other part numbers, and the FSA applied only to the early cars in the noted VIN range. [Note: Cor later commented below that he measured his dipstick and it was 28.25″ shoulder to end of tip and 26.875 shoulder to the max line, 27.25 to the min line.  This is exactly 1/2″ longer in all respects to my dipstick, and probably because the engines design includes a new down tube, etc.   So, I’d say this article definitely only applies to the early VINs in the FSA]

For those of you so inclined, I figured using an empirical measurement might be the best way to allay the concerns.  To that end, here is a simple way to see if you measure up.   I removed and cleaned my dipstick, and laid it out on a paper towel next to a tape measure.  I placed the end of the tape measure under the shoulder of the dipstick, and then held it out straight and measured the length.   My Aston Martin part number 4G4E-6750-AC dipstick overall length was exactly 27.75 inches (705 mm).  The ‘Min’ line was at 26.75″ (679.5 mm) and the ‘Max’ line was 26.375″ (670 mm).

Hopefully that gives you the answer you needed.  Let me know if you have an early model car with the original dipstick and what length it was, and I will add it (and a picture if you send one) to this article to flush it out.

4 thoughts on “How does the length of your Dipstick Measure Up?”