There are MANY service events for your DB9 that say to disconnect the battery as one of the steps.   I am as realistic as anyone in this regard – meaning I usually skip this step if I think I can get away with it.  The safety Nazi’s probably tell you disconnect the battery to vacuum the carpets.   But, there are certainly some circumstances where this should be followed.  Working on your fuel system, working on the electrical system, etc.  Any situation where an accidental spark or short could destroy parts of the car.The DB9 has a bunch of computer modules, and sadly they have ‘memories’ that require the battery to ALWAYS be present (more modern cars have memories that remain even if the power is removed).   If the battery power is interrupted for even a short period of time, they dump their stored memory parameters, and you have to set things up again.  Simple things like the clock and stereo presets, a few more challenging items like the window auto drop and seat calibrations, plus the more difficult misfire correction factors that must be relearned.   I’ve done blog posts on each of those already so I hope those help.

Aston Martin released Service Bulletin SB153 in December 2004 about each of the modules in the car that need reprogramming after losing power for any reason.  You can read SB153 here. 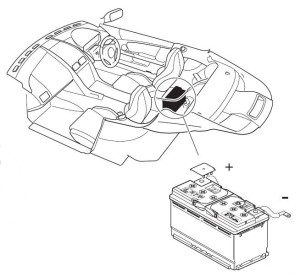 To be clear, I am talking about actually disconnecting the ground lead on the actual battery – cutting off all power to the car.   I am NOT talking about the battery disconnect button in the trunk (boot) that you could use when storing the vehicle.

The battery is located under the right hand rear seat.  Yep, it’s gonna be fun reaching this.  Limber up at Yoga class.

You don’t need many tools at all:

The process won’t take long.  You’ll be done in under 10 minutes.

That’s it for disconnecting the battery.  In another post I will cover connecting it again and the steps necessary to fix all the things that just lost their computer memories.

Here is a short video on the process.

A Warning about the Car Alarm 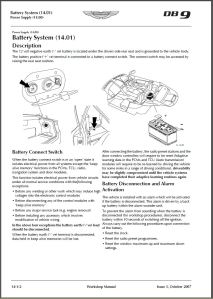 In the official Aston Martin Workshop manual section about the battery system, it has a warning that the cars alarm system will be set off if the battery is disconnected more than 10 seconds after the key is turned off.  Specifically:

When I disconnected my battery it was at least 30 minutes after switching off the ignition, and no alarm sounded.   Perhaps my car doesn’t have this feature, or the referenced back up battery is shot and can’t hold a charge either.   Anyways, you might want to factor this into your process.

8 thoughts on “Disconnecting the Battery in an Aston Martin DB9”