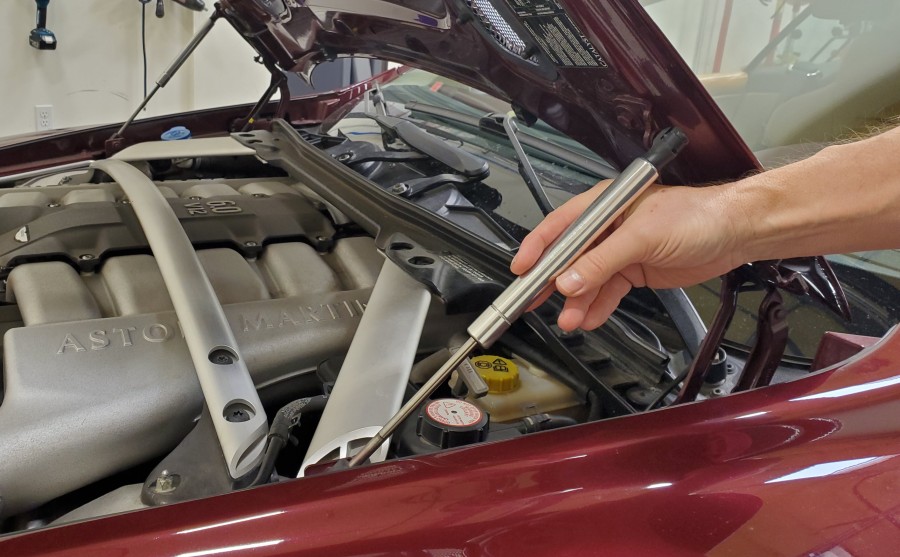 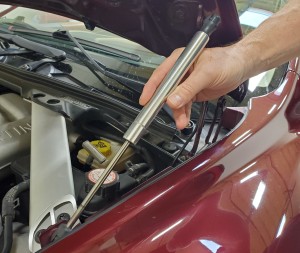 During my recent 1 year service I had the hood (bonnet) up while I was raising the car to get under her to drop the oil. There was a little wiggle/jiggle to the hood as the car went up. Then SLAM! The hood slammed shut unabated from full open. Holy crap – scared the jeebers out of me.

Other than raising my heart rate, this could have damaged a lot of things. The hood ‘stops’ are on the plastic front grill surround, it could easily have broken those off closing with such force. If I had left something sitting on the engine or slam panel (funnel, tools) it would have slammed hard against those and could have dented the hood (or my back!).

What’s going on here is that the two hydraulic gas struts that assist in lifting the hood, and keeping it open, are getting weak.  Eventually the seals begin to leak a bit and they no longer have the force they used to.  This is normal behavior as a car ages, and gets even worse as winter closes in. The good news is that replacing them is a fairly simple process and doesn’t cost an arm and a leg. Let me show you how.

Gas struts are very popular and it’s no surprise Aston didn’t make a bespoke strut but rather outsourced the struts to a German company Stabilus. You can see it right on the labelling.

I had a solid look around the Stabilus website thinking I could potentially bypass Aston for the purchase, but I wanted to be 100% certain of the part number and spec’s of the strut before I went this route. Stabilus has a ‘Spare Part’ lookup tool, and it included the Aston Martin DB9 Hood gas struts. It’s their part  3233YW. 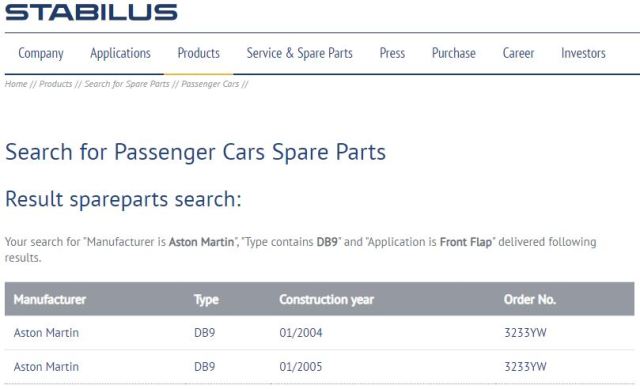 I figured great, I can Google that and get one off Amazon. Not so much. I certainly found some aftermarket struts that claim to be the equivalent, but I couldn’t be sure. I wasn’t able to find an exact ‘spec’ sheet from Stabilus with the dimensions and most importantly the Force rating [if you find an official one, please contact me with it]. I have measured it and the important facts are:

I still didn’t know the ‘Force’ the strut was rated for. Then I noticed the line right on the label: 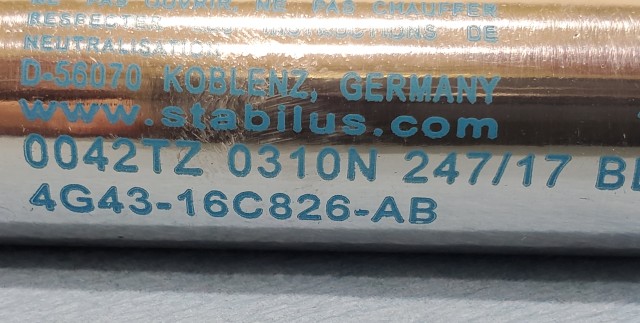 I ‘borrowed’ my Sweetie’s bathroom scale (again) and made up pair of wood blocks with a divot that I could use to squash the strut between and measure the force. 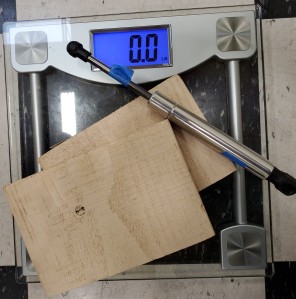 The struts should be mostly linear (the same force anywhere on the stroke), but I aimed to compress them about one inch. 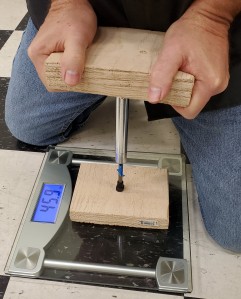 I tested both of the old tired struts and the new ones.  The two old struts tested to 36 and 42 pounds.  The two new struts both measured ~64 pounds.

The worst of the old struts was down by ~44% versus new. Considering the two struts, that would mean there was ~50 pounds less of supporting force holding up the hood. Explains why it was slamming.

Since the new struts measured out at 64 pounds, that’s 285 Newtons (N) and this doesn’t exactly match up to the label if they were supposed to be rated for 310N. I wasn’t sure if that’s what the label means, but maybe these two new struts weren’t as strong as they should be [if you get a pair and do a similar measurement test, please leave a comment down below what you get].

What does it cost to get this fixed at an Aston Martin Dealership?   Good piece of data to know if you are weighing if its worth the bother to fix it yourself.  Recently there was a 2007 DB9 sold over on www.BringATrailer.com, and the owner posted his last Dealer Service Invoice from a visit in 2020 when he had all the niggles fixed on his car.   The dealership was located in Northern California (one that I’ve visited before). 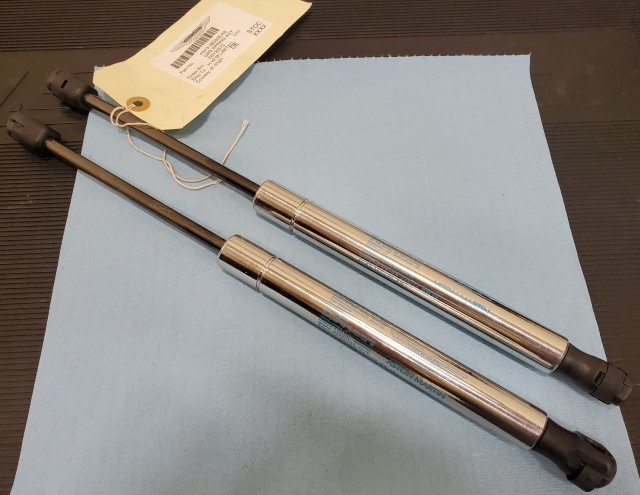 You can find them online for about $42 USD each here. If you live in the UK or EU you can reach out to the parts team at HWM England and they can probably give you a bit better pricing if you mention you were referred from this website.

This is a rare time when the Aston parts aren’t massively overpriced. I’d recommend that you pay the couple of extra bucks to get the Aston ones for peace of mind (and a neat logo).  Saving $10 on a part you change every 10+ years doesn’t make a lot of sense (IMHO).

You need very few tools and supplies to accomplish this task. 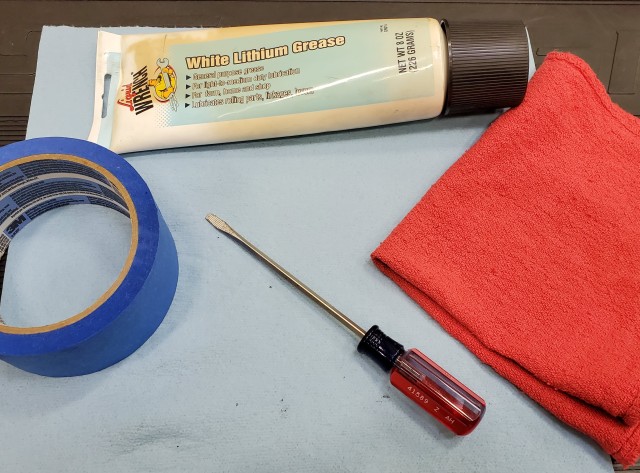 One very important tool not in the picture is a HELPER. You need someone or something to hold the Hood up while you remove the struts. You’ll see me use a camera tripod and do it solo, but if you can entice your Sweetie or friend to help you for 10 mins it will be even easier.

Swapping both struts will take less than 10 minutes and is pretty easy.

I checked the official Aston Martin Workshop manual and couldn’t find any specific reference to removing the struts. Other procedures mention removing them, but as “remove struts”. No details.

Learn how the Retaining Clips Work

Each end of the strut is a ball and socket arrangement. To keep the socket from slipping off the ball there is a sprung metal clip that acts as a retainer. It’s a simple matter to release once you know these tips.

You don’t need to remove the clip entirely to release it. Doing that would create a problem actually, the clip is a witch to get reinstalled if you accidentally pop it all the way out. To release the socket so it can slip off the ball you only need to retract the clip a small amount. Do this by slipping a small flat blade screwdriver in the slot on the head of the socket (see photo).  I strongly suggest you fiddle with this on the bench for a minute before trying it on the car.  Figure out how it works. 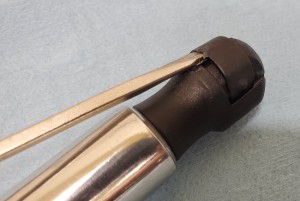 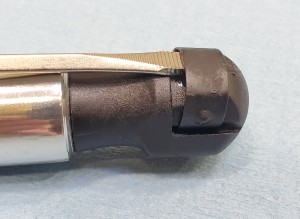 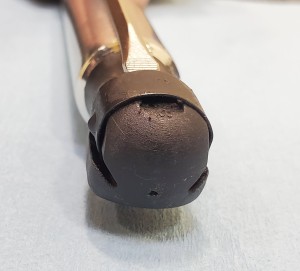 Just inserting it that far is enough to retract the clips far enough. Here are pictures of the socket with clips out and retracted.

The socket mounts over a ball, and the two things pivot under load. Having some lubricant (grease) in the socket will help. Inspect your new struts to see if there is a ‘dab’ [official measure] of grease in the socket already. If not, I’d suggest you put a dab of White Lithium grease in the socket. No need to spread it around, it will distribute as the ball inserts. 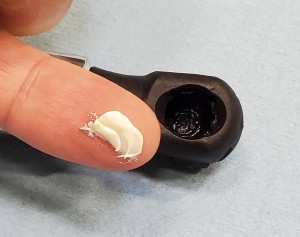 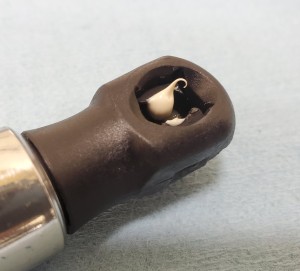 With the sockets lubed and tools in hand, lets get going:

Keep in mind you have two other sets of gas struts on the car.   They may be just as as worn out and need replacing.   There are a set for the Trunk (Boot) lid, and another set that help hold up those gorgeous Swan Wing doors.   I have articles on how to change both of those as well here:

I shot a quick video showing this process here.  Check it out: