If you’ve had your fuel injectors out as part of a larger project (like me dealing with a Lumpy Idle situation) or maybe you are just changing one (or more) of them, you need to know how to properly prepare and install them.  Your tasks will include getting them properly mated up with the fuel rails again, plus making all the electrical and vacuum connections.   Needless to say – I have a few tips to share.

To get to the point where I was ready to install the fuel injectors I had done a lot of work already.   Check out my other post and video on Disconnecting the Fuel Rails and Removing the Fuel Injectors.

If you are reinstalling your existing fuel injectors you need to replace the upper and lower O-rings.  The old ones get stiff and crispy due to the heat.  I’ve already covered this in great detail in my post on Parts Needed to Change your Spark Plugs and Coil Packs.   Basically you need Qty. 12 Blue Upper O-rings (Aston Martin p/n 6G43-08-10474) and

If you are installing new fuel injectors (Aston Martin part number 4G4E-9F593-A6A for Model Years 2004-2008) you can find them online for about $38 USD or for a little cheaper ($32 USD) by contacting Rob Sims at HWM in England.  Note:  The new fuel injectors include new O-rings so that’s one less worry.

You only need a few tools: 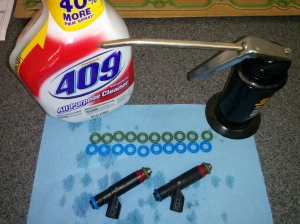 I was reinstalling my original fuel injectors so I wanted to get them cleaned up and serviced before I reinstalled them.

I started by removing the old upper (blue) and lower (green) O-rings.  I merely used my fingers to roll the old O-ring off the end of the injector.   If needed you could use a small flat blade screwdriver to carefully pryse under the old O-rings and pop them out of the groove.

I used the 409 Spray and lint free rags to wipe down the injector to make it clean and shiny like new.

Time to install the new O-rings.  I used a dab of clean engine oil on my finger tip and lubricated the ends of the injector to aid in slipping on the O-rings.  I then eased the Green O-ring into the lower groove, and the Blue O-ring into the upper groove.  After they were in the grooves I smeared a light coating of clean oil over the O-rings to help with installing them in the manifold later.

The final step was to check that the six (6) fuel rail mounting bolts were clean and undamaged.  I lubricated the first few threads of each both with a dab of clean engine oil so they will thread in smoothly later. 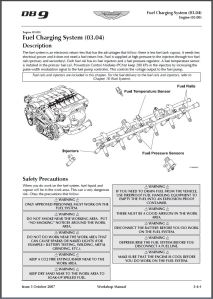 The Official Aston Martin Workshop Manual section 3.04 on the Fuel Charging System covers it in just a few steps (including the steps 3 & 4 which I skipped since we didn’t disconnect the fuel rails from the fuel supply lines).  I will be a bit more verbose below.

Overall preparing and installing the injectors and fuel rails might take you 30-45 minutes and is an easy procedure.

That should be everything reinstalled now.  Probably a good idea to double check one last time that all the electrical connectors are firmly seated and the vacuum lines are properly in place, and that nothing is pinched or bent.

I have to apologize now for a filming mishap.  The video below is missing the footage of connecting the fuel rails (my stupid production crew screwed up).  I accidentally turned the GoPro on and then off (pressed the button twice rather than once) and didn’t notice until now that I only had video footage AFTER I finished (when I pressed the button again thinking I was turning it off, and really turned it on again and got some useless footage of me walking around the garage).  Not the end of the world – I’d just suggest you watch the video on removing the fuel rails and you can see the steps essentially (video linked below).

Here is a video on the process I followed preparing the injectors and installing them into the manifolds.

Here is a video on REMOVING the fuel rails and injectors to give you a sense of the process.