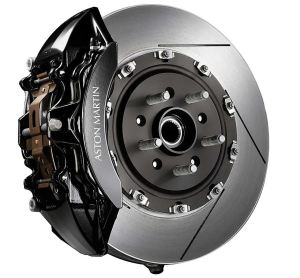 You may need to bleed the brakes on your DB9 for several reasons like replacing a caliper, a cracked hose, or as part of changing the brake fluid every year with the annual service (which is what I am doing).

Brake fluid is hygroscopic – which means it absorbs water, even out of the air.  The potential for water in the brake lines is bad mojo, so Aston Martin requires that all the brake fluid is changed as part of every annual service.

Warning – these are your Brakes!  They are a life saving device.  If you aren’t 100% confident in what you are about to do – DON’T GUESS – take the car to a shop or dealer.  Screwing up your air filter change is one thing, but screwing up your brakes will get you or someone else hurt.    This isn’t hard, but just be certain you are up for it before you start.

This isn’t a hard task, but as usual the prep work is where most of the effort is.  You’ll need to raise the car (at least one corner at a time) and remove the road wheel.  I’ve made posts and videos on these tasks already:

The only official part you need is the correct type of brake fluid.  Aston Martin workshop manual recommends using Castrol Super Response DOT 4 (specifically not silicon based brake fluid).  Castrol has changed the name now to Castrol React Performance DOT4 brake fluid.  I had a 1 liter bottle on hand (that cost about $20 online) .  The official Workshop Manual says the system holds 2.5 liters.

There is a note in the office Aston Martin Workshop Manual that warns that an old bottle of brake fluid that has been previously opened has had a chance to absorb moisture from the atmosphere, and that they want us to crack a brand new fresh bottle that’s been sealed right up to the last minute.

Updated Dec 2019 – Check out this entire article dedicated to Brake Fluid Options.  My recommended fluid now is Motul RBF 600 and it is readily available online.

There are fancy pneumatic brake bleeding systems available, but I went with the old fashioned manual ‘pump it up, hold, crack the valve’ approach with the help of an assistant.   The tools needed are:

I started the process by covering the fender and other areas surrounding the brake master cylinder with rags and towels.   Brake fluid is an EXCELLENT paint remover, so be exceptionally careful with it.

Next I opened and then topped up the master cylinder with fresh fluid.  I even over fill it a bit past the MAX line at this point since we will be going through a lot of fluid.  I just loosely left the cap on the master cylinder to stop any potential ‘splash out’ that might occur during the process, but also to allow it to breath easily.

I started on the Right Rear wheel first, the one furthest from the master cylinder, and then worked my way closer doing the Left Rear, then Right Front, then finally the Left Front.

Each caliper has two (2) bleed nipples, one inboard and the other outboard.  The official Aston Martin Workshop Manual also states we should bleed the inboard first, and then the outboard.

We are supposed to flush ALL the old fluid out of the system.  With a crappy old car you just bleed until the icky colored fluid looks clean and fresh, but with our cars doing it annually you don’t get a nice visual indicator like that to know when you are done.  I decided to bleed each rear nipple 10 times (that’s 20 times per caliper), and each front nipple 5 times (that’s 10 times per caliper).  [Feel free to comment if there is a better system to use]

Otherwise, the actual technique for manually bleeding the brakes is the same as for any modern car.  At each wheel I followed this process:

On the front wheels you can make your life a little easier by turning the steering wheel to full lock so that you can access the caliper better.

After I finished the last wheel (Left Front) I then carefully topped the master cylinder up to the MAX line, and replaced the cap.

Start your car and pump the brake pedal a few times and test that you have a rock solid pedal feel.   If it feels ‘squishy’ or you can pump it up to hard and then it goes back to squishy after a short while, you have somehow got air in the lines and you need to start all over.  If it’s hard like it should be,  take your car for a careful test drive to confirm everything is all right.  Revel in the satisfaction of a job well done!

Remember to dispose of your old brake fluid at a proper disposal facility (thanks Pep Boys!)

I have created a short video of the bleeding process:

A final thought – I have no idea if the process is different for a DB9 fitted with carbon ceramic brakes.  I suspect it will be similar, but I strongly recommend doing your own research on this.  [Let me know if it’s different and I will update this post]

8 thoughts on “Bleeding the Brakes on an Aston Martin DB9”