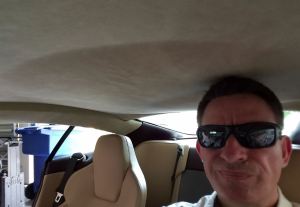 My DB9 developed a sagging headliner one hot summer California day.   The glue holding the beautiful Alcantara fabric to the Headliner form below let go, and the whole thing hangs sitting on your head.  Determined to fix it myself, I have put together a series of articles showing all the steps, and you can read that here.   This article is going to cover the satisfying step of finally removing the actual Headliner from the car.

I’ve done a bunch of work already to get to this point in the project:

You don’t need many to accomplish this step:

Normally you can be crafty and if you don’t have the exact right tool you might think you can get by prying around with some screwdrivers.  This is not the time for that.  You will mess up the pressed fiber board that makes up the headliner form.  It’s not very strong, and you need a tool JUST like this to slip under and pry up evenly just under the head of the clip.   You can probably pickup this tool for just a few dollar at your local auto supply store, or buy a kit that includes it for under $10 USD on Amazon.com.

You also need a pair of very clean hands.   You don’t want to have dirty and sweaty hands messing up your fancy interior panels.

The process will take you about 30 to 60 minutes.  Its not terribly difficult, but you are in some awkward positions and have to wrestle this big thing out of the car.

The Official Aston Martin Workshop Manual section 1.05 on Roof Trim Removal describes this succinctly in Step 5  as “Remove the headlining. (Held in place with ‘Fir Trees’ and two Velcro panels at the rear)”.   Partly right at least, and this led to me shearing off the Alignment Clip that they failed to include.  Here is my full explanation of what’s needed.

Once you get it out the door you have succeeded!   Here is what my sad headliner looked like when it was finally entirely free.

In the next article I will explain what I did to get the Alcantara re-glued to the existing Headliner form.

Here is a video of me going through the process.