If you are a member of any of the Aston Martin Owners FaceBook Group or online Forums (like PistonHeads or 6SpeedOnline) you will likely have seen some chatter talking about fitting a ‘Secondary Cat Delete Kit’ (SCDK) in your car to increase the power and improve the sound.  It’s not like the stock DB9 has a deficiency in either department already, but its promise is a simple change will give you more of each.  Intrigued by this I couldn’t resist researching how to tackle this. 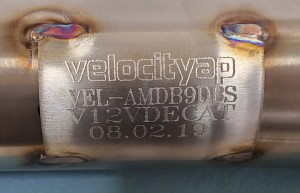 There are several vendors that make SCDKs, and in this article I will be covering my experience with the kit from Velocity AP.  Velocity AP is a great company steered by Stuart Dickinson.   They started in the UK, and moved their facilities to British Columbia, Canada a few years back.  They make all their products in house.   Read on to learn about their kit and how to fit it.

What is a Secondary Cat Delete Kit?   I had to figure this out too.   The DB9 V12 engine is fitted with a total of six (6) Catalytic Converters.  Two Primaries and one Secondary for each bank of the engine.  So four primaries total, and two secondaries.

A Catalytic Converters job is to reach very high temperatures internally (as much as 800 °F) to chemically change the pollutants in the exhaust stream into less nasty things.  They contain very expensive exotic metals to do this, including platinum.  You can learn more about it over on Wikipedia here.   Basically an exhaust gas cleanser. 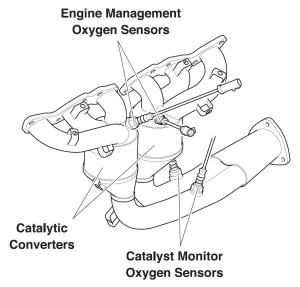 The Primaries are located right up in the engine bay and are integrated into the exhaust headers near the cylinder head.   Each primary serves three cylinders.

There are O2 sensors up and down stream of each primary catalytic converter.  O2 sensors tell the PCM (the computer that controls the engine) how much unburnt fuel is in the exhaust stream as it enters the converter and as it exits.  The PCM then adjusts the amount of fuel injected into those three cylinders to achieve the perfect balance of Air/Fuel ratio,  maximizing fuel economy, power and minimizing emissions.

Most cars only have a primary catalytic convertor.  This begs the question what is the secondary catalytic converter installed in the DB9 and Vantage actually doing.   I don’t know.  There are no O2 sensors fitted around it, so it has zero influence on the cars control system.    I suspect it might be fitted to ‘polish’ the exhaust stream in cold start scenarios where for a very short period of time while the converters are getting up to temperature some pollutants are slipping through the primaries.  But, the secondaries will be colder than the primaries, and thus function even worse.  Hence, I don’t know.

The downside of this extra set of converters is additional restriction (back pressure) in the exhaust system flow.   For performance reasons we do everything we can to eliminate back pressure so we can let the exhaust breath easier.   More flow generally means more power.   The best scenario is big short straight pipes with no restrictions (just like a Top Fuel Dragster).  We can’t exactly have flames spitting straight out the side of the engine bay, so we are seeking a compromise.

A SCDK does just what it says, it removes the Secondary Catalytic Converter and replace it with a simple straight section of pipe.  Supposedly this accomplishes three things that you might find desirable in your car:

Is is legal?   In the US the answer is officially ‘No’.   Generally anything the modifies anything with respect to the emission controls system is not allowed.   As such, I am only doing this as a test of what a SCDK will do and then I will return my car to stock ;>)

I know there will be some of you saying “Aston designed it into the system for some reason and it would be foolish to remove it”.   I get that.  But, I also believe manufacturers have to make cars that work in the world market, and perhaps this was designed in as a safety factor or mandated requirement for some country that doesn’t apply to where I live.   I couldn’t resist trying it out, so here is my plan:

OK, enough research and planning, lets get on with bolting some parts on the car!

We need to only order a couple of items to tackle this project.

The Velocity AP Secondary Cat Delete kit is available online direct from Velocity AP for about $795 USD (find it online here).   They ship everywhere, but obviously this is a great choice in Canada and the USA. 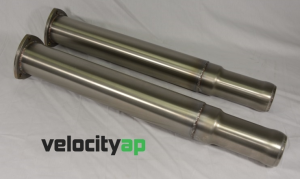 It’s a very professional looking kit.  The pipes are made from Stainless Steel.  The welds are ground and polished internally.  Unlike other kits they keep the larger header diameter for 75% of the length of the pipe, and then neck down to the smaller diameter of the exhaust pipe with a second section of pipe welded in. A potential advantage to this is that keeping the pipe size larger improves the ‘flow’ for a longer period of time.

The kit includes the two secondary Cat delete pipes, PLUS the six stainless steel nuts and bolts to replace the likely deteriorated ones that mount it to the exhaust headers.

The kit I actually received didn’t include the gaskets that are now shown on the product page.  Not sure why (shipping oversight?) or perhaps they’ve decided to include them now.  I generally don’t like to reuse gaskets as a rule.   They are Aston Martin p/n  4G43-5E281-AA-PK (2 pack).   You can it from your local Aston Dealer or online for about $36.57 USD here.   I actually picked mine up from Frank Marino who had an extra set he was selling off on the FaceBook group for Aston Martin Parts (which I suggest you join, lots of interesting stuff at good prices show up there, find it here).

Note:  As you’ll see in the video when I install the kit, the old gaskets I removed were in remarkably good condition after 15 years and 42,000 miles.   They easily could have been reused.   I live in corrosion free dry California.  You might opt to pick up the gaskets anyways since they aren’t a big investment and to have them in case yours aren’t in the same shape.

One supply I ordered in to have on hand was Exhaust Paste.  The official Aston Martin Workshop Manual Section 9.03 on the Exhaust System Piping says to use some undefined Exhaust Paste during reassembly of the clamped end.  I ordered a small tube of Permatex Exhaust Paste online from Amazon for about $3.70 USD.   My plan was to review the joint when I disassembled it and if it had no paste on it from the factory, I was NOT going to apply any during the pipe install unless there was any pitting or corrosion on the downstream exhaust pipes.  As you’ll see mine are in near pristine condition, so I ended up not using this.  But, if you live in a more corrosion prone environment, you might have some on hand and use a dab during reassembly to make sure you get a gas tight seal.

You don’t need anything exotic, just some basic shop tools:

You’ll need to tackle a few steps first to get to the point where its time to install the Secondary Cat Delete Kit.  I’ve made articles and videos on each of the steps to get you ready:

The only reference is about 11 words in the official Aston Martin Workshop Manual Section 9.03 on the Exhaust System Piping.   It makes reference to using the exhaust paste and provides the torque specs (which is good).   Below is my more detailed description with a few tips along the way.

The whole process will take only about 20-30 minutes.

With the pipes fitted you can get on with putting the rest of it back together, including the proper way to refit the shear panel.  I’ve got a few articles and videos to help:

While I had the old secondary cats removed, and the new pipes still on the bench I stole my sweetie’s kitchen scale and weighed the difference. 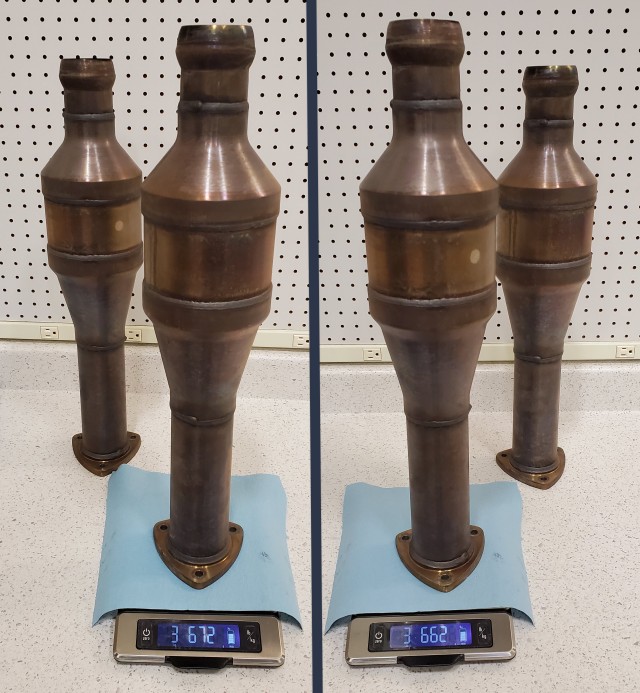 Here is a video where I follow the procedure to get them fitted.  Check it out, seeing how its done is always helpful.